Traditional Greek cuisine is the healthiest food in the Mediterranean. The food is not complicated. The diet is based largely on fruits, vegetables, fish, whole grains, cheese and yogurt. Protein sources come from beans and legumes such as fava, split peas, and lentils which are staples in soups, stews and salads. Eating is seasonal: in the summer tomatos are common while leeks and spinach prevail in the winter. Only in the past generation or so has meat skyrocketed in consumption. The traditional Greek meal, however, is humble and delicious.

Every region in Greece boasts their own local specialties. Here are just few to get your mouth watering:

Greek Olive Oil – the secret of a successful dish
Greece is the largest olive oil producer in the world and unsurprisingly, olive oil rules its cuisine. A typical recipe can call for a cup or more of olive oil. Non-Greek cooks are tempted to fudge on this until they learn that substitutions or reductions in olive oil always diminish the flavor and authenticity of the dish. Enter the kitchen guilt-free — olive oil is rich in monounsaturated fat and studies suggest that increased olive oil consumption is associated with a decrease in coronary heart disease. Greeks practically bathe in it. 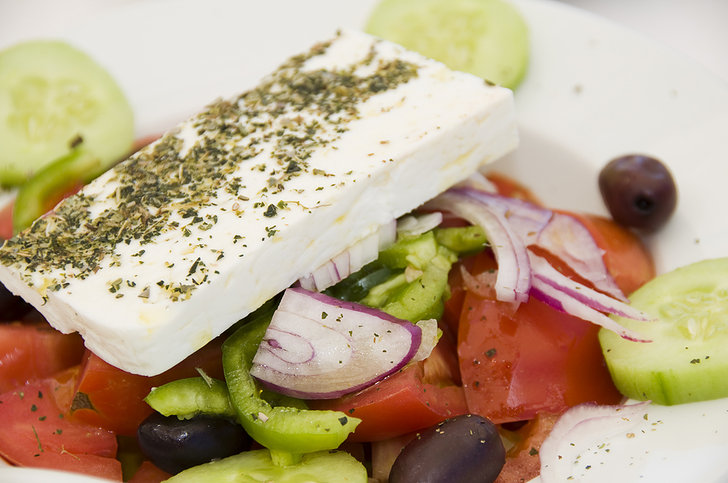 What is a “Greek salad”?
“Greek salad” is a staple on many a menu, even found in ethnic eateries like Mexican or Italian restaurants. Yet, these Greek salads are imposters! A true Greek horiatiki, or village salad, doesn’t contain lettuce or crumbled feta cheese. The ingredients are simple and consistent: big chunks of juicy tomatoes, thick, crisp cucumbers, red onion and green pepper slices. Drench this mixture with olive oil and freshly squeezed lemon juice. Sprinkle in fresh oregano. Garnish with a few Greek olives. Add a generous slab of feta cheese. That’s it!

Feta and a Cornucopia of Cheeses
These days feta is as common to the American palate as Velveeta cheese was in the sixties. The difference is feta is healthy and tasty. Made from sheep and goat’s milk, Greeks let it age in large barrels for two months before consumption. Feta is practically the national food of Greece. In 2005, Europe’s highest court ruled that feta cheese is a traditional Greek product and non-Greek European feta producers are not allowed to call their product “feta.”

The Greeks know a thing or two about wine since they’ve been producing wines for millennia. Wineries today are mostly family run, many for several generations. Greek wines are not so famous abroad because production in most wineries is not high enough for export: most Greek wine stays in Greece. Almost all Greek families own or have access to vineyards and produce their own wine for home consumption. The most popular commercial wine regions are Attica, Nemea, Macedonia, Peloponnese and Crete. Santorini wine deserves special mention. The grapes grow on circular vines that lie in the volcanic soil like wreathes. As the vines grow upward, they form a basket that collects the night fog, the source of water. See the Attica Wineries tour. 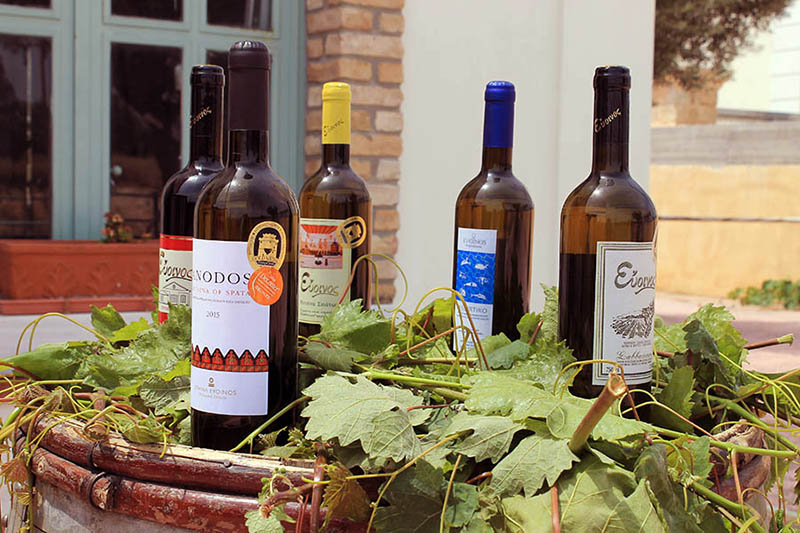 Serve in bowls, drizzle with a little olive oil and decorate with black olives. Good to eat plain or as a dip.

Ingredients for one medium oven tray

2. In a bowl, combine all the filling ingredients (spring onions, onions, parsley, dill, mint, rice, salt, pepper, 1/2 of the oil).

3. Spread out one leaf onto a plate, rough side up.

4. Place some filling on the stalk end of the leaf.

5. Fold over the stalk end of the leaf to cover the filling.

6. Tuck in each side of the leaf, and continue rolling gently until the filling is completely enclosed into a tight roll.

7. Cover the bottom of a casserole pot with left over leaves.  Place the dolmades on the leaves, join side down, packed neatly side by side in rows.

8. Add the boiling water, the lemon juice, and the rest of the olive oil.  Place an inverted plate over the dolmades, for some weight, place the lid on, and simmer gently till the rice is done.