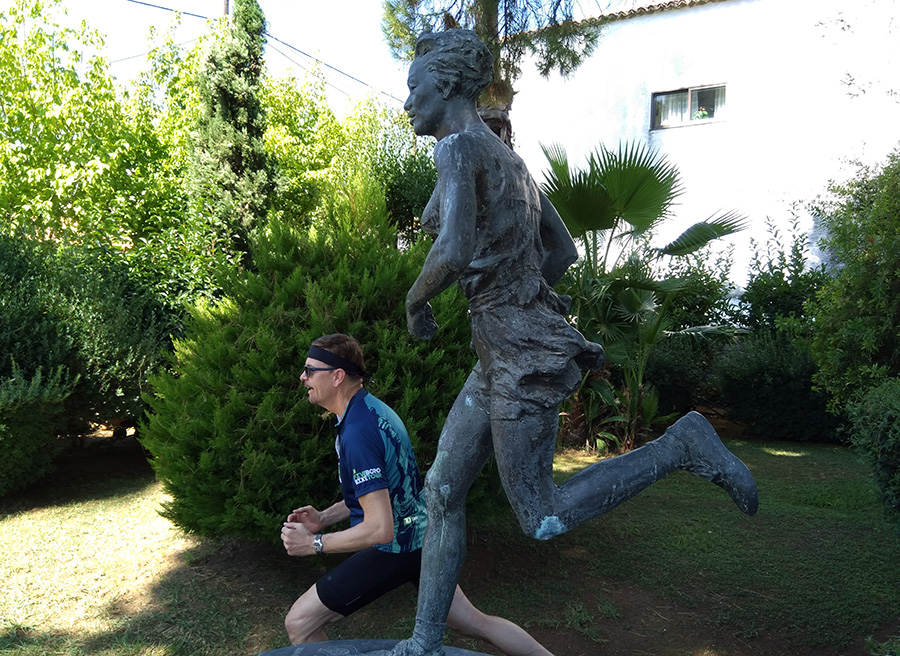 The town of Marathon in eastern Attica region is famous for two historic events.  The first, the Battle of Marathon, occurred in 490 BC when outmanned Athenian soldiers defeated the invading Persians, the super power of their day who had never been defeated in war.   6400 Perisans died and 192 Greeks.   The second event occurred in 1896 when Europeans resurrected the Olympics Games and re-created the route Phidippides ran from the fields of Marathon to Athens to announce the victory over the Persians.  The Europeans called this competitive race a “marathon.”

The tour starts off at the Marathon Dam which was built in 1931, the largest project in the Balkans at the time, and was the sole supplier of water to Athens until 1959.   The dam makes an ideal spot for a photo shoot with its vast scenic stretch of nature and water.  Next stop is the Marathon Runners Museum which has exhibits to fascinate even non-runners, such as, the posters from all past Olympic marathons and a document bearing Jesse Owens’ original signature.

The Battle of Marathon tour is relatively easy because Marathon lies near at the coast and the roads are flat and rural.   The only hill is downhill, a thrilling descent from the Marathon Dam to Marathon.   If there is sufficient time, it is truly worthwhile to walk in the wetlands of nearby Schinias National Park.   Schinias consists of six ecosystems with a pine forest, a lake, a bay and the ancient Makaria Spring.

On Monday the Runners Museum is closed.  On Tuesdays the Archaeology Museum and Tumulus are closed.

The day starts with a vehicle transfer from central Athens to the Marathon Dam, 45 kilometers northeast of Athens (28 miles). You bike across the dam (935 feet, 285 meters) and then a thrilling 8.8 kilometer descent to the Marathon Runner’s Museum.

The Marathon Archaeology Museum is not in the town exactly but actually is located in the midst of agricultural fields, which means very rural cycling in farmland. From here bikers head for the sea coast to encounter the Tumulus where the 192 Spartans from the Battle of Marathon are buried. Get off the bike and walk in the sacred park area.

Lunch is at a seaside fish taverna. After lunch, bike to the site where the Battle of Marathon took place; here you will see the remnants of a lonely column. If there is sufficient time, there is hiking in Schinias National Park on a dirt path that features 115 bird species, foxes, turtles, frogs and freshwater fish.

The day ends with a vehicle transfer back to central Athens.

Transfers to and from your central Athens hotel

Tour Leader / Bike Guide:  the Tour Leader handles all the tour logistics and cycles with the group.  For 2-3 riders, no bike guide, just cue sheets and driver indicates the route.

Bikes: Specialized Allez road bike or hybrid bike. Triple chain ring, 27 gears. Road bike has carbon fiber fork. Hybrids have front suspension. Electric bike available as an upgrade on request for 50 euros. Regular pedals or toe clips on request. You are welcome to bring your own clip-in pedals and shoes.  See Our Bikes and Our Gear

Entry fees to all sites and museums

If you are only a day tripper – perhaps you are a cruise traveler – you will need to contact us to arrange the date and time you wish to schedule a day tour and we’ll let you know how to make payment.

See details in the Booking Agreement which you must agree as a condition to participation in a CycleGreece tour. Participants are also required to sign a Waiver & Release of Liability.

See the original medal of the first Marathon winner

Enter the burial grounds where the 192 Marathon soldiers are buried