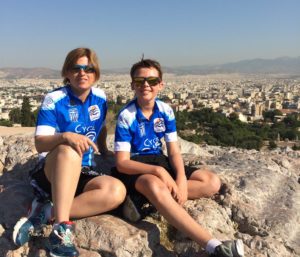 The Historic Central Athens bike tour Is 90% traffic free and stops at 25 points of interest in the old city.   Many sites on the tour are simply inaccessible to motor vehicles.  It is impossible to cover this much terrain by foot in three hours.

The bike guide leads riders through narrow Plaka streets, weaves in and out of the Acropolis pedestrian walkway, cycles up the car-free commercial thoroughfare of Ermou and pedals around the National Gardens.   The tour’s unheralded sites, like the Anafi neighborhood, are just as interesting as the famous sites, like the changing of the guard at Parliament or the 1896 Olympic Stadium.

The Historic Central Athens bike tour is child-friendly for children eight years and older who can either ride their own bike or ride a tag-along connected to their parent’s bike.

This bike tour is also attractive to cruise ship travelers looking for an active experience off the ship.

The Full Day Historic Athens tour is offered for those who want to combine a bike ride with a private walking tour of the Acropolis and Acropolis Museum with a professional guide.  If you have already seen the Acropolis, a fine substitute is walking up to Lycabettus, the highest point in Athens.

The three hour bike tour usually lasts from  9:00 am to 12:00 noon, but it can also start earlier at 8:30 am or even 8:00 am.   It is best to start the tour early to avoid the pedestrian crowds and take advantage of cooler mornings.  The bike tour can start later and it can occur in the afternoon as well.  The tour is 90% traffic free with very light traffic in the Plaka.

The tour covers 25 points of interest in historic central Athens, some of which are well known, such as, Tomb of the Unknown Soldier at Syntagma Square where the changing of the guard takes place.  Other sites are less frequently visited by tourists, such as, the Pnyx where democracy was born or Socrates’ Prison.  The tour has points of interest that are not even mentioned in guidebooks, but they too offer a fascinating peek into the many layers of Greek history that abound in central Athens.   The tour does not enter government controlled archaeology sites, such as, the Acropolis, the Roman and Greek Agoras or the Temple of Zeus.

After lunch you take a three hour private tour on foot with a professional guide to the Acropolis and Acropolis Museum.   The guides we work with make the Acropolis come alive with history and meaning.

Alternatively, if you have already seen the Acropolis, the afternoon can be spent with a visit to Lycabettus, the highest point in Athens.  There is a path to walk up to Lycabettus or take the cable car.  Atop Lycabettus is a church and a café and most important, stupendous 360 degree views of all Athens.

Whether you opt for Acropolis or Lycabettus, the tour ends by no later than 5:00 pm, or earlier if you have a cruise ship to catch.

Electric bikes are available as an upgrade for 50 euros.

For cruise ship travelers, transfer from the ship directly to the tour start point and return transfer after the ride to the ship.  If linger in Athens after the bike tour, no transfer included. 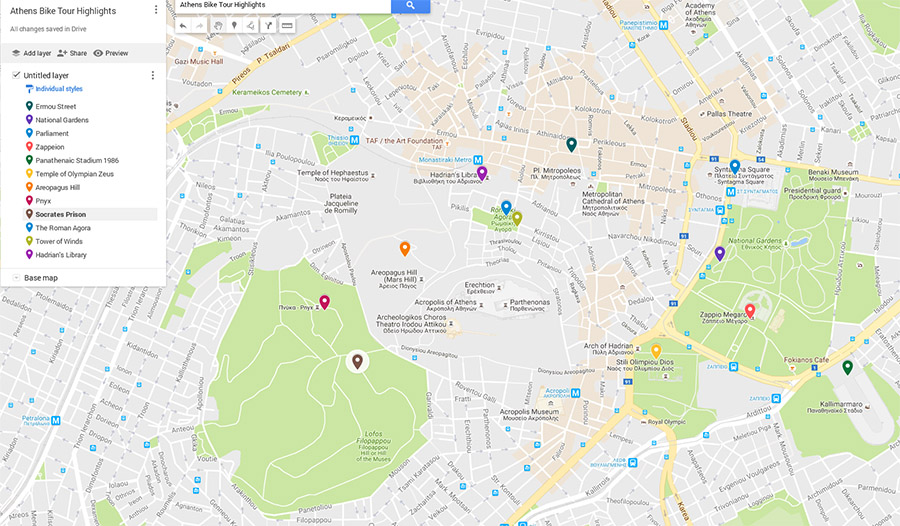 If you are only a day tripper – perhaps you are a cruise traveler – you will need to contact us to arrange the date and time you wish to schedule a day tour and we’ll let you know how to make payment.

See details in the Booking Agreement which you must agree as a condition to participation in a CycleGreece tour. Participants are also required to sign a Waiver & Release of Liability.

Peek inside the prison cell where the philosopher Socrates was held

Get your photograph taken standing next to the Presidential Guards

Visit the Pnyx, the birthplace of democracy

Bike up the street where the British poet Lord Byron lived

Light a candle, make a wish, in an archaic Byzantine church