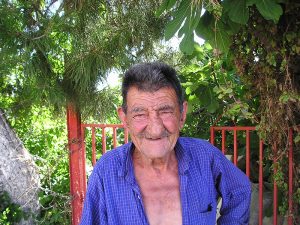 An ancient mystique lures me to a foreign land.  The island of Lesvos proved bewitchingly alluring, not least because it is home to the oldest known female poet in history, Sappho, born in 628 BC in the town of Erassos.  A second beckoning ingredient is a land’s potential for fine cycling,and Lesvos fit this bill.

Also known as Mytilini, Greece’s third largest island has a network of at least 400 miles of well-maintained paved roads. I once spent two weeks bicycling to just about every town and village in the island accessible by asphalt.  I’m happy to report that as a single female traveler, I was never once harassed, disturbed, or pestered by any man.

Despite its size, foreign tourists do not dominate the island the way they command Santorini and Mykonos.  There are pockets of mostly northern European tourist, yet more common are the countless empty beaches that make a bikini cumbersome.  Rather than cater to tourists, Lesvians cherish a tranquil flow to life, insisting on the two or three hour 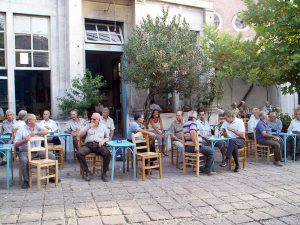 afternoon nap regardless of whether business can be transacted and profits made. Siga-siga, meaning slowly in Greek, is a word I soon learned.

Lesvos terrain is strange.  While the east is flush with greenery, orchards and water, the western half is dry and barren, having a desert feel.  One thing that makes it easy to cycle in Lesvos, even its western side, is that you can always find fresh water to drink.  Every town has at least one fountain, and invariably you’ll come upon running water in the middle of absolutely nowhere.  In the mountains, the water is refreshingly cold and delicious.

I cycled throughout the island at a leisurely pace, stopping to tour several monasteries, soak in outdoor hot springs, marvel at the tantalizing view of the Turkish coastline or stop pedaling to listen to the clink-clank-clink orchestra of a score of goats crossing the road.

I loved biking into mountain villages of 200-300 residents, like Pterounda or Ambelika or Pelopi whose Dukakis Street is named after guess who.  Each village has a little plateia (square) with several coffeehouses, called kafeneions, where men sit for hours drinking thick Greek coffee from doll-sized white cups, “Mavro,” they order (black).  There were a few times I was told that I was the only bicyclist in memory to cycle into their town. 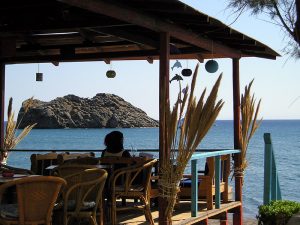 Lesvians were in constant awe of my ability to traverse the island by bicycle.  Biking 40 kilometers from Petra to Xidera by noon caused eyes to bulge in Xidera.  Any new person joining the conversation was instantly advised of this remarkable feat as if I’d just cycled a century.  I confess it felt great to be regarded as an athlete of Olympian caliber.

What the island lacks in antiquities, it makes up elsewhere, like the fascinating petrified forest with standing “trees.” Migrating birds from Africa attract an international crowd of birdwatchers.  The Keloni Gulf, looking like a big lake, offers great windsurfing and the best sardines in Greece. Thermal hot springs punctuate the island, some lying directly in the sea, others inland.  And of course, ouzo — that delightfully licorice tasting liquor –was born in Lesvos. 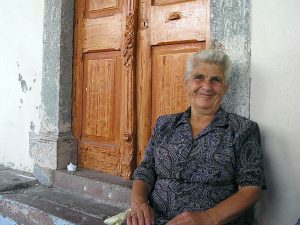 Visitors to Lesvos regard this precious island as one of Greece’s best kept secrets.  The people are warm and riendly.  The food is divinely delicious in part because Lesvos produces some of Greece’s finest olive oil.  There are as yet no high rise hotels or packaged jumbo jets of tacky tourists trampling all over the place.  You likely won’t meet another foreign tourist while on the road.   For sister cyclists on the look-out for a female friendly, mountain-sea locale that offers physical challenges and a siga-siga charm, Lesvos is waiting to unleash your goddess spirit.