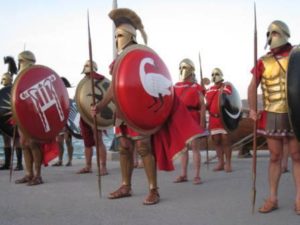 In 490 BC, according to Herodotus, the Athenian general Miltiades sent a herald to Sparta requesting reinforcements against the invading Persian army. The messenger, a professional runner named Phidippides, traversed rocky mountains to reach Sparta 250 kilometers away in a phenomenal two days.

Today in Greece this legendary event is celebrated by the Spartathlon, an ultra-marathon, and the Spartakiada, a cycling challenge. Both events follow Phidippides’ route as faithfully as possible from Athens to Sparta.

The superstitious Spartans delayed aid until after the full moon, arriving a useless five days later. On their own and beyond their wildest expectations the Athenians defeated the Persians at the momentous battle of Marathon: 6400 Persian soldiers dead versus 192 Greeks. Phidippides supposedly then ran 40 kilometers (26 miles) to Athens to deliver news of the astounding Greek victory. In fact, unlike his previous tour de force, Phidippides never ran from Marathon to Athens, but the lore makes good press for modern marathon organizers.

With zero regard to lunar phases, contemporary Greeks schedule the annual Spartakiada and Spartathlon a week apart in late September or October when the southern Mediterranean sun is more charitable to athletes. The Spartathlon is a race with a laurel wreath crowned winner. For the past three years that honor has gone to a long distance runner from Minnesota, a vegan named Scott Jurek. By contrast, the Spartakiada is not a competition. The first cyclist who crosses Sparta’s finish line is not even acknowledged in the evening’s awards ceremony.

In Greece where I live most of the year, Phidippides is as familiar to Greek school children as Davy Crockett is to American kids. Sheepishly, I confess I had never heard of him or his feat, let alone the two daunting contemporary events he inspired. Yet, I am now a veteran of one of them.

I’ve been biking since I was practically teething, but only as a commuter and recreationally. I’m no athlete. I’m no racer. I did once bike from New York City to San Francisco by myself carrying my gear which admittedly takes a certain endurance. Yet, I could never conceive of cycling 250 kilometers across the Peloponnese mountains in one day.

An unlikely candidate, I bear the distinction of being the only American woman, indeed the only non-Greek female, to ride the Spartakiada.

The party responsible for getting me to even consider the Spartakiada is my biking buddy Giorgos Altyparmakis. He is an incorrigible cyclist who has introduced me to so many of Greece’s magnificent roads, asphalt and dirt. The guy is also an eccentric character of Zorba-like proportions.

Giorgos is sixty-ish but carries on like a thirty- or forty-something, most evident in his night riding. As if channeling his lunar worshipping pagan ancestors, Giorgos regularly cycles during the panselinos when the sky is as bright as city street lights. This bewitching Greek word meaning “full moon” combines “pan” (all) with Selena, the ancient Greek goddess of the moon.

Giorgos is also notorious for his relentless pace — not fast, slow actually, but his excursions are characterized by only two or three short rest stops in an 8-10 hour cycling day that can culminate around midnight sleeping in a vacant monastery. Few bikers are able to ride with him. He graciously lets me hang along and somehow I keep up.

Giorgos owns a bike shop — not selling bikes, just repairing them. His place is unlike any bike shop you’ve ever patronized. Slightly larger than a New England mud room, it is cramped with what strikes my untrained eye as junk and layers of dust accumulated from the forty years his family has owned the shop. Dickensian is an apt description. Located in a now seedy neighborhood, his clients must acclimate to the sight of the meretricious transvestite hooker pacing across the street hustling for business. Several times I have found Giorgos seated in his musty setting trueing a wheel, listening to opera, oblivious to the encroaching riff raff.

Giorgos is the best bike mechanic in Greece. I have witnessed him in the woods fix a disassembling triple chain ring with a hunting knife when no tools were available. Yet, truth be told, he has little competition in the bike repair department. Despite being the home of the original Olympics, the majority of Greeks these days are dedicated couch potatos in the winter and beach potatos in the summer. In most quarters cycling is practically regarded as an extreme sport. Unlike the rest of Europe where a bicycle culture has flourished for decades, Greece seemed to go from the donkey to the car.

One spring day in 2005 Giorgos told me about this marvelous event whose origins lie in ancient Greek history. He and five fellow cyclists, the original founders, began the Spartakiada in 1988 motivated by ethnic pride. He suggested I join him for the 2005 ride. Preposterous. But he kept encouraging me and finally I said OK. Registration entailed a doctor’s written sign-off and competing in two qualifying brevets. The brevet requirements are waived for non-resident foreigners. 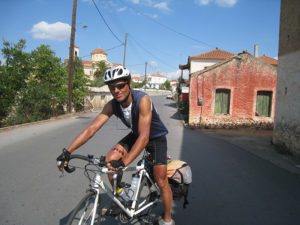 It was still dark at 6:30 a.m. when I arrived to the Spartakiada starting line at the 1896 Olympic Stadium in Athens. I found 125 cyclists gathered there, a disappointing number for a nation of eleven million. Though small, the country’s cycling clique consists of serious contenders. Most of them were riding thoroughbreds (expensive bikes), including me on my Colnago C40. Lots of guys were making fun of my Shimano sandals, a novelty no one had ever seen. I kept having to show inquirers, including Spartakiada officials, the sole of my shoe to prove they were pedal click-ins — a ride requirement.

We set off a respectable one-half hour late, at 7:30 a.m., with a police escort taking us through car-infested Athens. The route has one rest break for fifteen minutes shortly after crossing the Corinth Canal bridge. Thereafter, no breaks except you must stop at two points to get your bib number recorded, an obligation to deter cheaters from sneaking to Sparta in a friend’s car. Water and snacks are set out by the organizers at these three stops but no where else.

I hung with the pack for the first half of the route. The toughest climb comes at kilometer 145, ascending from sea level to 2625 feet in fifteen kilometers. That mountain’s nickname is Kolosourtes which means “drags your butt” and this is where I got dropped and rode the rest of the way with other stragglers. The route’s highest peak is 2952 feet at kilometer 220 and then with one short exception, it is downhill the remaining thirty kilometers to Sparta.

When I did the ride in 2

005, I had never been to Sparta. I didn’t know that to get to the finish line you had to make a right turn off the main road. By the time I arrived the crowds had diminished and the traffic police vanished, no doubt retired to kafeneio for an afternoon shot of ouzo. I kept cycling until I came upon the town exit sign and realized something was wrong. I reversed course and finally made it to the finish line in the town square at 6:05 p.m., safely satisfying the Spartakiada’s time limit to complete the route within twelve hours. It was a heady finish for me because I was dismayed to discover that – just as Giorgos predicted — I actually had the degree of strength this ride demands.

At that evening’s outdoors ceremony in the town square medals were handed out by age group to every person who completed the ride and I proudly stepped forward to receive mine. Haris Plegas, an organizer, explained to me the reason no winner is named is because the Spartakiada is not a race. The founders’ original intent was friendly, non-competitive, more out of curiosity to see if it could be done since no Greek cyclist had ever accomplished such distance in one day in Greece. Competitive riders cycle the next morning in a genuine race where real winners are lauded. The 30 kilometer route starts at Mystras, an abandoned Byzantine town which is an official World Heritage Site.

Nowadays the awards ceremony also honors cyclists who accomplish ten Spartakiadas, and in 2005 at least five men basked in momentary glory. Then the most bewildering award was announced for “most fertile cyclist.” The emcee called out, “Who has two kids? Three? Four?” Someone with five children won and was presented a medal by Sparta’s highest priest, resplendent in the customary Greek Orthodox long black robe, oblong head gear and a gray beard stretching to his chest. I couldn’t figure out if this category was comic relief or dead serious and related to reports that male cyclists allegedly suffer impotency.

I was in the States during the 2006 Spartakiada and in Crete for the 2007 one. In 2008, I felt rather out of shape and reluctant to do another Spartakiada. Yet, when Giorgos told me that it was the 20th anniversary and the organizers were rallying for 300 cyclists to sign up, I put trepidations aside and succumbed once again to the thrill of the occasion.

The organizers sought 300 cyclists to replicate the indomitable 300 Spartan soldiers who kept the Persians at bay in Thermopylae ten years after Phidippides’ historic run. No Spartakiada had ever lured 300 cyclists. For the 20th ride, 285 cyclists across Greece registered, including a 72 year old Cretan prepared to consummate his tenth Spartatkiada. Besides a Dutch man, I was the only other foreigner to sign up, the only American, and certainly, according to Mr. Plegas, the only non-Greek woman.

Of the 285 cyclists who registered, only 240 showed up at the 1896 Olympic Stadium starting line. Of these 240, only 198 actually pedaled across the finish line in Sparta, including four women in their thirties, and I at 54 years old. 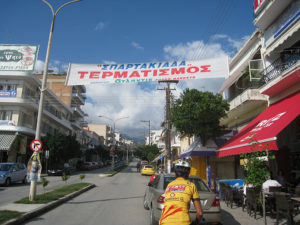 The “no shows” chickened out because the weather forecast predicted rain. It didn’t rain. It poured. Non-stop. About 10 kilometers outside Athens, the drizzle started and turned to incessant showers by the time we reached Corinth some fifty kilometers later. While waiting at the start line, the Dutch fellow boasted that he had never encountered rain when biking in Greece. Well, he jinxed the day, and now he was flush with it. Apart from a minor let-up outside Tripoli, rain reigned the entire day. In the mountains, my hands were so wet and cold that my fingers stiffened and I had to use the palm of my hand pushing several times to change gears.

Riders complained about the miserable interminable rain but I didn’t share their sentiment. Having completed this exceptional Spartakiada within the time limit under truly merciless conditions, I felt I had earned the right to be declared an honorary Spartan. And that is an exhilarating feeling to which the Greek gods concurred. A mere two kilometers outside Sparta the sun strained to peak through the clouds. Minutes later when I cycled across the finish line, there was my reward – a big fat Greek rainbow slicing the Spartan skyline. 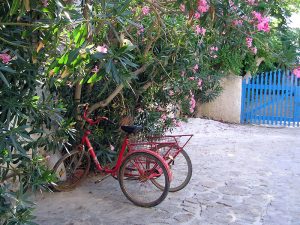 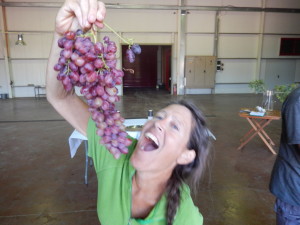