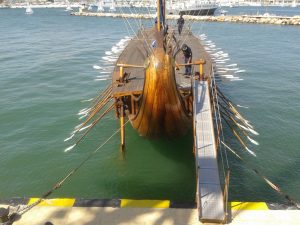 For a fleeting moment this summer, I had the opportunity to inhabit the role of an ancient Greek sailor.   For three euros, the modern Greek Navy gave me and about 170 other fantasizers the chance to be a rower on the Olympias, a reconstructed trireme 37 meters long (122 feet).

A trireme was a seagoing vessel used by the Greeks in the 7th to 4th centuries BC as a fast and agile warship.   The Olympias was built in the 1980s based on detailed discussions with history, literature and archaeology experts to approximate a true trireme.  However, the actual materials used for the Olympias were presumably inaccessible to Mediterranean boat builders  — Oregon pine, Virginia oak and iroko, a teak-like wood from tropical Africa used for the keel. 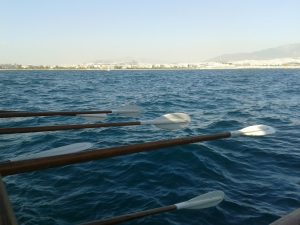 Triremes are propelled by three tiers of oars on both sides with an upper seat, middle seat and lower seat.   I scrambled for an upper seat on the Olympias which offered a full view of the sea.  Late-comers were relegated to the bottom tier with no views and no breeze.  I imagined those seats were once reserved for the slaves.  Yet, on researching triremes, I learned that the ancient navies were composed only of free men by which many, particularly working class Athenians, could fulfill their military service obligations.   Foreign mercenaries were also aboard, but no slaves, except in emergencies, and then they were set free before employment. 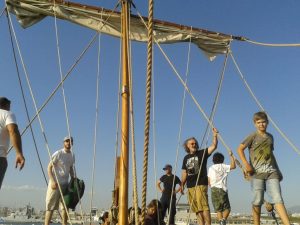 It was a little awkward reaching my “window” seat, bending low and stepping over and between long wooden oars.   Perched on a square piece of wood, I placed my feet on what looked like inverse starting blocks for sprint races with leather straps to lace up.  For serious rowers these foot things probably served the same purpose as toe clips do for cyclists. 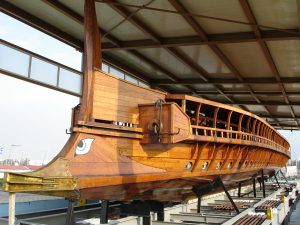 There were approximately 170 of us rowers on this sunny late afternoon, plus a number of young kids allowed to sit in the aisles next to their parents.  We were a pretty pathetic crew with no prior training and next to no instructions.  When the captain yelled “ena” (one), you hovered your oar over the water.  When he yelled “dio” (two), you dropped the oar and pulled it towards you through the water.   Sounds simple enough but humans are not ants or bees who instinctively know how to work in unison.  Our group rowed as if each of us were alone in our own private rowboat oblivious to what the others were doing. The vertical tiers of oars kept colliding with each other which resulted in putting the vessel way too close to the jetty.    I felt a little sheepish when a Navy motor ship had to rescue the Olympias and tow us out to the open sea. 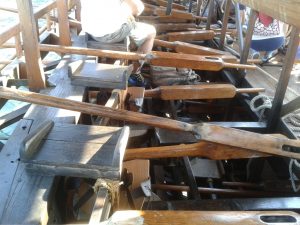 Once in the Argo Saronic waters, the real crew (the Navy) rose the two masts.  I regret I didn’t make an effort to struggle out of my seat to go up to the deck as surely those two sails must have been a beautiful view.    In the open waters with nothing around for miles, we practiced our moves and actually began to achieve a modicum of group coordination.  By the time we got back to port the crew was rowing in earnest harmony.     It was a truly a unique experience.

The Olympias is docked full time in dry dock at Flisvos Marina along with other historic ships in the open air museum known as Naval Tradition Park.   This trireme replica is the only commissioned vessel of its kind in any of the world’s navies.