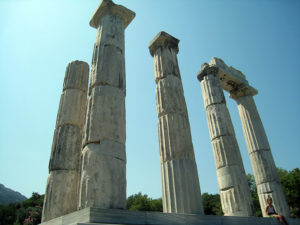 Her statuesque image is an inspirational icon. Her flowing white robe denotes freedom. She is 2300 years old and comes from the Greek island of Samothraki. Her name is Winged Victory, or Nike which means “victory” in Greek.

Samothraki is not an easy destination to reach from Greece’s capital, Athens, since there is no longer direct ferry service. You must make your way to the northern city of Alexandroupoli –11 hours by bus, 50 minutes by air — and synchronize your travel to catch one of two daily boats to the island.

Olympic Airlines doesn’t charge for bikes in cargo, and since I had enough frequent flyer mileage for two passengers, I opted to fly north in July, 2009 with my best biking buddy Giorgos Altyparmakis.

Debarking from the two hour boat ride, Giorgos and I biked up to Chora, the capital, a little more than an oversized village. It was Greek siesta hour by the time we arrived with stores and homes shuttered during this self-imposed de rigueur daily curfew. I was disappointed to miss the cute little town in action especially after energetically pedaling a steep ascent to reach it.

The ride would have been almost effortless on a road bike but we had fat tires and were lugging our gear, principally a tent.

A tent is almost a necessity on Samothraki. With a dearth of middle-class Greek tourists, I could count on one hand the number of hotels I saw. The young and young-at-heart camp out at one of two government operated camp sites; 10 euros is the entry fee for two persons with a tent. The camp grounds are located in a green forest with huge ferns where you can carve out a space for your tent and bikes. Seated on the ground you cannot see your neighbors in their fern-enclosed space. If that isn’t enchanting enough, this verdant landscape lies right next to a cobalt blue seascape.

In Greece, I don’t recall ever seeing tall trees of a mountainous woodlands variety lying adjacent to a beach. Despite an absence of solitude, I adored this campsite. I heard that the police are on a constant look-out for those pitching tents outside the two official camps and will fine scofflaws. This struck me as remarkable because, apart from officers directing traffic at the harbor, I never once saw a single cop on the entire island.

With only twelve villages, Samothraki has few roads and only one gas station. Truth be told, it is more a hiker’s haven. The principle reason to bring a bike is to have your own transport. The island is small enough that most destinations are accessible on two wheels. It’s a liberating ride up the northern flat coast hugging the sea with little vehicle traffic. The road side sparkles with so many hues of green one thinks of springtime in Ireland. Several times on that stretch of road our cycling was halted by large goat herds crossing from one side to the other. You had to scream to hear each other, such was the animals’ cacophony of dozens of bronze goat bells whose varying sizes emitted a symphony of sounds. 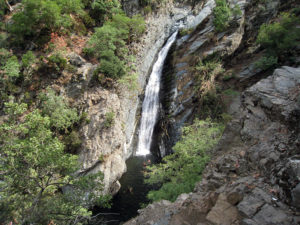 The most sought after destinations on a hot summer day are the vathres, meaning rock pools, as in swimmin’ holes. Some are at ground level and we just biked directly to them. For higher ones, such as the Fonias River, we parked the bikes and climbed a mountain path sprinkled with gangly gnarly hollowed trees that resemble clubhouses for gremlins.

There are four waterfalls on the Fonias River, each ending in a pool, or rather a series of pools. Swimmers splash in the warm fresh waters, so distinct from the chilly salt sea water surrounding the island. Sun bathers, some naked, sprawl on the boulders amidst sycamores and iridescent dragonflies. The higher you climb, the thinner the crowd. Giorgos and I made it to the top and final waterfall and splashed about the pools in exhilaration, all alone until some guys arrived and we courteously surrendered the tranquility of the site over to them. 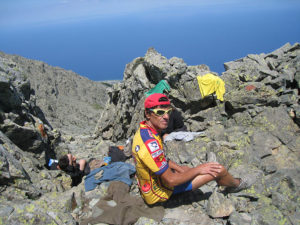 On our third day we biked to the starting path of the six hour hike up Mt. Fengari; at 5285 feet, it is the highest peak in the Aegean Sea. Fengari is Greek for “moon.” It is said that if you summit on a full moon your wish will come true. We missed that opportunity, but it was a clear day and the views were tremendous. An unruly and wild wind beckoned us off the mountain.

It was serendipitous that Giorgos and I biked to the Sanctuary of the Great Gods on a religious holiday. Villagers were playing traditional songs on a clarinet and accordion and the sweet sounds carried way up to where we were roaming the archaeology site.

As early as the late Bronze Age, Samothraki was the Northern Aegean’s spiritual center whose mysteries and pilgrimages lasted until the 2nd century BC. The Sanctuary includes the Arsinoeion, the largest circular ancient building known in Greece and used for libations and sacrifices. To this day the secret rituals that took place in the Sanctuary are still unknown, but they were as important as the celebrated secret ceremonies of Eleusis. We know that women and slaves participated, unlike elitist Eleusis where only free men were allowed.

Oh, yes, I did encounter an American archaeo-architectural student at the Sanctuary. She was working on a Harvard project for a second summer mapping all the Sanctuary’s buildings, or remnants of buildings. I practically interrogated her for information because the descriptive plaques at the grounds and museum are so modest. 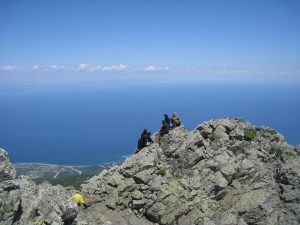 The Sanctuary of the Gods is where the Winged Goddess presided for centuries. I went to her marble columned spot feeling awed by the power that still emanated from her spirit which persistently lingers at the site. In 1863 a French diplomat and amateur archaeologist abducted her and she is currently held hostage in the Louvre. Now that Greece has a state of the art museum to house the Acropolis marbles (opened June 20, 2009), it is high time Nike came home.

I suspect that if Nike were brought back to Greece she would be thrilled to know that cyclists are paying homage to her by visiting her homeland of Samothraki on two wheels, perhaps as charioteers did in her day, also on two wheels.